For one incredible week, Team Lake Placid adventured around Innsbruck, Austria at the 2016 International Children’s Games (ICG). Recognized by the International Olympic Committee, the event is for young athletes ages 12-15 from around the world to experience sport, new cultures and understanding. This was the 7th winter games in the 49 years of ICG history. Sports, friendship and respect were mottos of this winter’s games.

Pin trading at the Olympics is a tradition and it was no different at the International Children’s Games. Before the Opening Ceremonies, athletes were able to spend time talking with other young athletes and trading their designation’s town or country pin. Lake Placid was a hot pin, along with Cleveland USA and Australia’s kangaroo.

The organizing committee did an amazing job with the opening ceremonies. Because USA is at the end of the alphabet, Team Lake Placid had a long wait in line to go on stage but we got to be the final team announced before the home team from Innsbruck and that was pretty neat. We entered the stage, waving our flag high, ready to experience the pure excitement the week was going to bring the team. #we are ready #timetogetserious 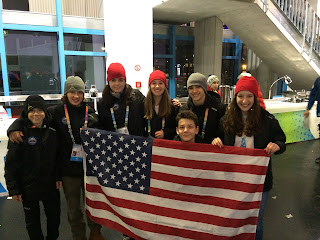 Official Training Day
The cross-country races were in the town of Seefeld, about a 30 minute shuttle ride from the motel in Gotzens. Seefeld Arena has played host to multiple World Cup races, the first Youth Olympic Games in 2012 and will host the FIS Nordic World Championships in 2019.
The course twisted and turned around the outruns of the HS 109 and HS 75 ski jumps. It looked a lot like Lake Placid, minus the backdrop of the 9,000 foot Alps Mountains. The classic race was going to be 1.5 laps to make a 3.5 km race. There were a lot of double pole sections, but one good climb and a downhill with about 6 alpine gates to slalom through (both to test the athletes’ skills and also to slow the skiers down before a tight left hand turn at the bottom). A loop around the lower trails and a short, quick climb back to the stadium area made the lap complete. A solid course that was fun, fair and tested the kids skills and fitness – and if you missed a gate you got 30 seconds added to your race time!

The official training day was 32 degrees and snowing. New snow is one of the trickiest waxing conditions. Team Lake Placid skied 1 lap of the roughly 1.5 km loop and the first try with a kick wax was no good. The team stopped at the wax cabin and tried to fix the skis with a different kick wax, skied a lap and that was also no good. One more try to fix the kick wax, skied a lap and again no good. Every team was having the same problem with icing skis and no glide. The boys started talking about double poling the course on skate skis and everyone went out for a lap to give that a try.

Coach Marge’s Notes: I was thinking zero skis (but that wasn’t a real option because no one on our team had those skis) or hairies (hand-made zeros aka skis with a sand papered kick zone and no kick wax) might work and made a quick job on one ski. It kind of work and if had been completed all the way, really would have worked. Luckily, James’s dad John was staying in Seefeld and knew there was a ski store near by. John went and bought the team wax remover and more sandpaper for race day to make sure we’d be ready for whatever the weather did the next morning. 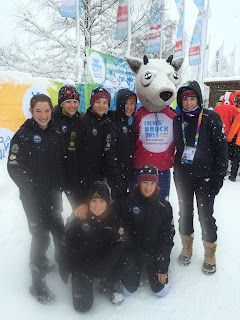 Coach Marge’s Notes: Ski conditions were very similar to the training day. I decided to make 1 ski with hairies and 1 ski with a kick wax. The hairies ski worked and the kick wax was again no good. With 3 total tests with hairies vs. kick wax combos, time was running out to make a decision about race skis. I decided hairies was the way to go and because there was going to be a lot of double pole this was a better option to keep the skis fast and would still get the athletes up the one good climb. Starting with Van’s skis (because he was the first to race), I got the kids skis ready. Van skied a lap and came back smiling with “skis are perfect”. A coach loves to hear these words on race morning and I was happy to be in the clear, being a little unsure if the young U14s would be able to really kick a pair of hairy skis. Everyone else went and tried their skis with everyone having luck, except Adrian. Adrian came back to the wax room door saying “the skis are terrible, I’m going on my waxless skis”. I remember smiling and confidently explaining to him that his skis could be fixed and that the waxless skis would be too slow. A little more sandpaper and little longer kick zone and Adrian was sent out the door to go ski another lap. Adrian returned again to the wax room saying “these skis are too sticky, I’m going on my waxless skis”. Again, pretty certain Adrian’s skis could be fixed and with a little corking to the kick zone to make less kick and more glide and Adrian was sent out the door to go ski another lap. Returning after try #3 and this time smiling, Adrian excitedly telling everyone “I found ski nirvana, these skis are perfect!”. I started laughing at his comedy and said to Adrian: “good, now stay off your race skis and go warm-up on your waxless skis”. This is one of my favorite stories from the whole trip. Everyone had great skis and were able to go ski their best. The boys started the day off with Jesse in 6th, James in 10th, Adrian in 22nd and Van in 28th. The girls skied strong with Anya in 20th and Sylvie in 23rd. All in all, a good fun day of racing and no one missed an alpine gate on the downhill! 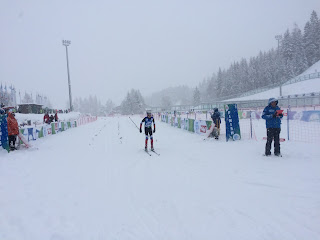 Coach Marge’s Notes: This was an exciting day! You could see 90% of the course from the stadium. Similar to the classic day but with a few more twists, a few rollers, and a few 90 degree turns to mix things up.

The boys started the sprint qualifier with strong results: Jesse in 2nd, James in 9th, Adrian in 21st and Van in 33rd. The girls raced next with Sylvie finishing in 21st and Anya in 24th place.

Adrian was up first in quarterfinal 1 and skied tough, but placed 5th and didn’t move on to the semi-finals. Jesse and James were in quarterfinal 4 and worked together to ski clean and easily move on to the semi-finals by finishing 1-2. James had some impressive moves to recover from a slow start to ski up to the front of the heat. Again in the semi-final together, Jesse and James worked hard to move on to the finals. Jesse won the semi-final heat by more than 5 seconds (posting the 3rd fastest time of the day!) and James had a bit of tangle up at the beginning and had to play catch up. James skied as fast as he could but in a short race it was not enough and he finished the heat in 6th and with a final result of 12th on the day. Jesse was excited and ready to rock and roll in the final. This was a tough heat and close fight to the finish with Jesse finishing in 4th overall. 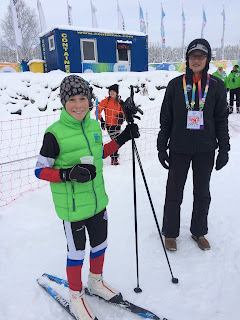 Van and Martina in the finish area 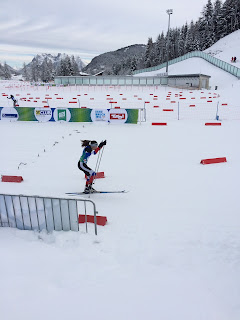 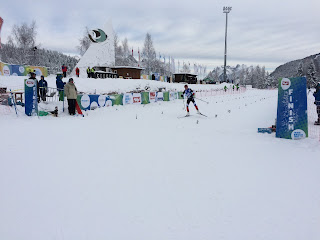 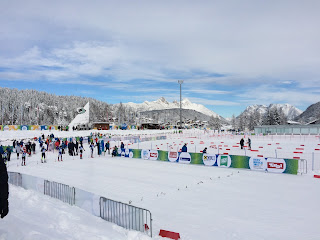 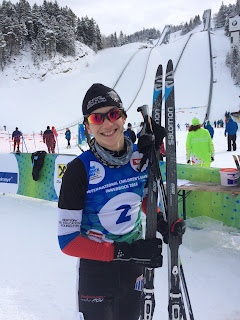 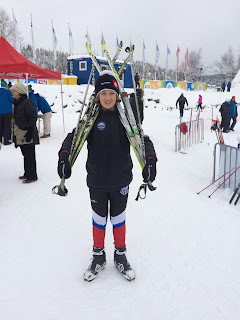 Adrian is going to be a wax tech one day 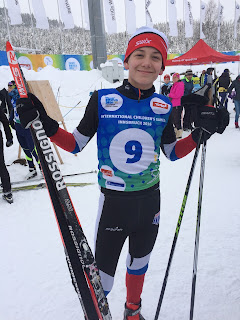 James had a strong races and showed impressive ski skills 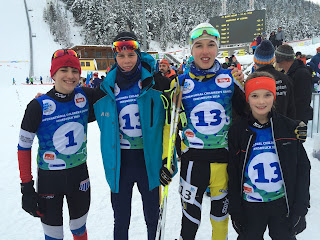 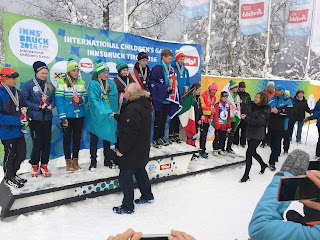 This was everyone’s final chance to trade jackets, pins and say goodbye to new friends. New Taipei City was handed the ICG torch for the next International Children’s Games this summer. One incredible experience. Thanks Innsbruck! 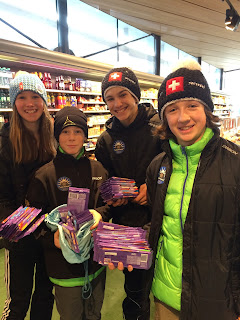 a little bit of chocolate to take home 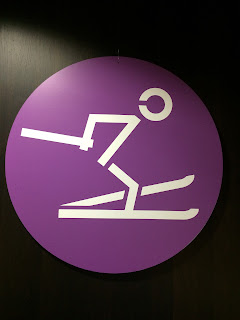